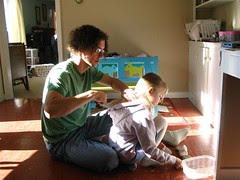 In Canada, more dads taking time off when babies arrive, increasing from 38% in 2001 to 55% in 2006. Those numbers still seem awfully low to me...almost half of fathers don't take ANY time off when their babies arrive? Dads can take a parental leave of up to 35 weeks (that guarantees they can return to a position equivalent to the one they had) with the government kicking in 55% of their earnings (up to a max of $423/week) while they're on leave. It's a good program -- I've taken advantage of it twice, and will again in August this year. In spite of this opportunity, two thirds of fathers return to work within one month of the child's arrival, mostly using vacation time...so most aren't even using the program.

90% of Canadian moms take time off work, with half staying home between 12 and 47 months and another third returned between six and 11 months. Canadian moms get 15 weeks of paid leave (at the same benefit rate as above) and then the additonal 35 weeks can be split between spouses, so perhaps moms usually use the full amount, leaving nothing left for the dads.

Many families can't afford the reduction in income(s) for a full year. We've always saved up enough money to make the leaves feasible, but I've agonized a fair bit over the length of my leaves -- despite the legal protection here, stepping outside of the organization that employs me means falling out of the loop and sending the message that I'm not interested in climbing the ladder.

The Wikipedia entry for parental leave is fascinating, showing the different approaches around the world. It makes U.S. labour policies look pathetic -- I mean, most African countries have better parental leave programs.
Posted by Jeremy at 1:22 PM

Thank you for this informative post on parental leave. I was not aware that Canada, had a similar program to many countries in Europe. I had the opportunity to take advantage of some of the parental leave policies in Germany, even though my husband did not, but it was at least available. Here in the US, you are correct, is the lack of such program just inexcusable.
Maybe after the elections - well, I can dream.
Peace